Founded in 1980, the E. F. Schumacher Society was named for German-born economist E. F. Schumacher, who moved to England during World War II. Author of Small is Beautiful: Economics as if People Mattered (1973), A Guide for the Perplexed (1977) and Good Work (1979). Schumacher argued for a system of diverse regional economies producing locally for local consumption in an ecologically and socially responsible manner – what he called an "economics of permanence." 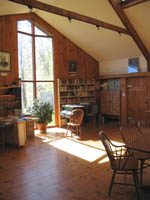 The Interior of the Library

"For twenty-six years the E. F. Schumacher Society has worked to engage scholars and citizen-activists in building strong local economies that link people, land, and community. Following Schumacher's lead, the Society's programs seek to create the foundations for a new economy based on the decentralization of wealth and power, democratic participation, human needs, and respect for the environment." -E. F. Schumacher Society

The E. F. Schumacher Society, located in Great Barrington, Massachusetts, was founded in 1980 by Robert Swann and a group of E. F. Schumacher’s American friends and colleagues. A lifelong pacifist and advocate of decentralism, Swann was drawn to Schumacher’s ideas through reading his articles in Resurgence magazine. In 1967 he went to England to meet Schumacher and suggested to him that these articles be published in book form. This led directly to the collection of essays that became Small Is Beautiful. Swann subsequently organized Schumacher’s 1974 North America tour to promote the book, a trip that was also to have a catalytic effect on the sustainable energy movement in the United States. At the end of the tour Schumacher suggested that Swann establish a United States-based group to work at the interface of economics, land use, and applied technology. Six years later, at the urging of Ian Baldwin, David Ehrenfeld, Hazel Henderson, Satish Kumar, and John McClaughry, Robert Swann took on the challenge, and the E. F. Schumacher Society came into being. With Susan Witt as the Executive Director, the Society continues to pursue its mission of helping to build strong local economies.

A community land trust's primary function is to buy or accept gifts of land and lease it back to members under a 99-year lease that is inheritable and automatically renewable. Through this long-term land lease, the trust removes land from the speculative market and facilitates multiple uses such as affordable housing, agriculture, and preservation of open space. In conjunction with land-use planners, local government, and the community at large the trust determines the most appropriate use or uses for a given parcel of land, be it a wildlife refuge, a group of houses, a managed woodlot, a commercial development, or a farm producing vegetables grown for the local market.

The Community Land Trust in the Southern Berkshires currently holds three parcels of land. The first is Alvastra, a 10-acre parcel at the foot of Jug End Mountain that includes four residences, the E. F. Schumacher Society library and office, and an apple orchard planted in 1925. The second is Forest Row, a residential community of 18 dwellings on 21 acres, much of which is undeveloped woodlands. The third is Indian Line Farm, an active organic farm and the country's first community-supported agriculture (CSA) farm. Indian Line Farm sits on 17 acres, including sensitive wetland areas that are permanently preserved.

The Schumacher Society believes that a vital local economy depends on the affordable access to credit for small import-replacing businesses. Local currencies are a form of micro-credit and demonstrate visible consumer support of regional businesses. The Schumacher Society is a leader in the local currency movement, and in 2004 convened an international conference on local currencies entitled "Local Currencies in the 21st Century." It is a primary sponsor of the issue of a southern Berkshire currency called BerkShares and has been responsible for the research and development of this program, which involves banks, the Southern Berkshire Chamber of Commerce, local businesses, and local non-profits.

Local currencies are an important part of the work of the E.F. Schumacher Society. The Society has been involved in a number of local currency projects in the past, including Deli Dollars, a single-store scrip issued in Great Barrington, Massachusetts in 1989 with the help of Society staff. Deli Dollars drew national media to the Berkshire region, helped renew public interest in local currencies as a tool for community economic revitalization, and led to the current issue of BerkShares.

Additionally, the Society hosts an annual training seminar: "Building Sustainable Local Economies" focuses on issues that link people, land, and community in accordance with the mission of the Society. The seminar brings together young community leaders from around the country to study community-based tools for building sustainable economies and to share their experiences and lessons. Lecturers on a wide variety of specific topics and projects take part.

The Society also hosts other events from time to time, most notably, an international conference in 2004 "Local Currencies in the 21st Century."

The personal libraries of Fritz Schumacher, Robert Swann (Society founder and founder of the community land trust movement), George Benello (leader in worker cooperative movement), of Robyn Van En (founder of first community-supported agriculture farm in North America and leader of the CSA movement), William Ellis (publisher of TRANET, a newsletter covering international development issues), Dick Bliss (founder of East Hill School and leader in the alternative schools movement), Peter Gillingham (partner with Fritz Schumacher in work on appropriate technology), and other leading decentralist thinkers. The Library, with its online catalogues, is a unique research opportunity for those exploring the roots of decentralist thought and action.

The Society's website ([1]) provides free access to its publications, including the legal documents for its model programs, seminar background papers, conference proceedings, and position papers. It also contains an extensive directory of Community Land Trusts around the country.