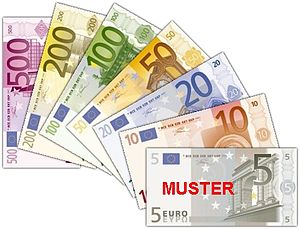 The euro (currency sign: €; currency code: EUR) is the official currency of the European Union (EU). Fifteen member states have adopted it, known collectively as the Eurozone (Austria, Belgium, Cyprus, Finland, France, Germany, Greece, Ireland, Italy, Luxembourg, Malta, the Netherlands, Portugal, Slovenia, Spain). The currency is also used in five further countries with formal agreements and six other countries without such agreements. Hence it is the single currency for over 320 million Europeans.<ref></ref> Including areas using currencies pegged to the euro, the euro directly affects close to 500 million people worldwide.<ref>Number is a sum of estimated populations (as stated in their respective articles) of: all Eurozone members; all users of euro not part of Eurozone (whether officially agreed upon or not); all areas which use a currency pegged to the euro, and only the euro. — Please see detailed summation in article Eurozone</ref> With more than €610 billion in circulation as of December 2006 (equivalent to US$802 billion at the exchange rates at the time), the euro is the currency with the highest combined value of cash in circulation in the world, having surpassed the U.S. dollar (USD).<ref></ref>